Difference between revisions of "Shuffled"

This page summarises the information currently contained in the unfiction Thread here: [1]

It is likely that this page may be quite large. When considering whether or not to read it prior to posting on a forum, consider that the alternative is to read all 43 pages of forum thread. 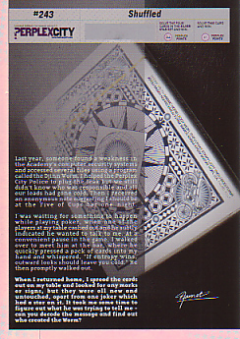 Last year, someone found a weakness in the Academy's computer security systems and accessed several files using a program called the Djinn Worm. I helped the Perplex City Police to plug the leak but we still didn't know who was responsible and all our leads had gone cold. Then I received an anonymous note suggesting I should be at the Five of Cups bar one night.

I was waiting for something to happen while playing poker, when one of the players at my table cashed out and he subtly indicated he wanted to talk to me. At a convenient pause in the game, I walked over to meet him at the bar, where he quickly pressed a pack of cards into my hand and whispered, "If entropy wins, outward looks should leave you cold." He then promptly walked out.

When I returned home, I spread the cards out on my table and looked for any marks or signs, but they were all new and untouched, apart from one joker which had a star on it. It took me some time to figure out what he was trying to tell me - can you decode the message and find out who created the Worm?

Side of the pack has the letters below. The bolded characters disappear under heat [[3]].

An interesting anagram of the bolded letters: FLUXED FROM TURF HIGH UP.

Cognivia's main research and development division is based at their campus on the south side of Polygon Park. Security is exceptionally tight to prevent industrial espionage, and the campus and buildings are said to be state of the art; rumours persist that Cognivia even has its own private subway station. Cognivia maintains strong links with the Academy and University, hence their selection of a site close to both. The corporate headquarters of Cognivia is based in Ascendancy Point.

Examine the card more closely. If you're feeling cold, you're overly sensitive, as for the code, everything you need is there

There was a great deal of discussion on this topic, largely centering around discovering the make of the bike. The discovery of the 'correct' card manufacturer has discredited this line of investigation. Particular credit should go to modern_hero for spotting this after 33! pages of discussion [5]

Key Words and their Definitions

A number of significant words occur in the text. The generally agreed meaning for each is displayed (where links, if available)

As it pertains to cards:

Including the disappearing text:

Only the standard characters:

54 Letter pairs allows for one letter pair for each of the 54 playing cards. The problem arises in that there is no logical pairing of the characters that creates 54 unique pairs. This would provide an encoded deck for the Solitaire Cipher.

The message passed to Garnet was: "If entropy wins, outward looks should leave you cold"

The Solitaire Cipher was designed by Bruce Schneier for the book 'The Cryptonomicon'. Details of the cipher can be found at Bruce Schneier's site, here: [16]

This was initially proposed due to the existence of the starred joker, as per the ciphers description in the above book.

The possibility of brute forcing has been mentioned at various points. The potential for this attack to be successful depends on whether or not you believe that the card sequence is the Prime numbered playing cards (Playing card symbols).

The nature of a solitaire cipher is that it generates a string of random characters which are then added to the plain text to produce the cipher text (see Wikipedia:Stream Cipher)

Because of this, a cipher text of XDFGW RESDF could translate to both SENTE ROCKS and SENTE SUCKS. This broadly implys that every possible 108 character string can be produced from the cipher text, and hence brute forcing is not possible.

If you assume that the prime numbered cards are part of the solution, then while this narrows the number of possible strings down, it is still possible to produce a number of strings that are a 'legitimate' solution.

Sources for the initial deck encoding

This idea has been reasonably discredited: [25]

Sources for the Cipher Text

Details of the Mirdek cipher can be found here: [30]

This is another Card based cipher designed to handle the errors found in solitaire. It hasn't been widely investigated at this point.

Possible Creators of the Djinn Worm