In the Perplex City Video two slides give the details:

This is suspected that a meet or a event is going to take place on Abbey Road, London. The webcam points to the crossing the beatles made famous on one of there album covers. A team of people are prepared and are travelling to Abbey Road for that time period, in hope of some character interaction or a good puzzle. 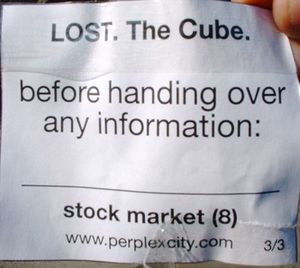 On arrival at noon, chrome_halo found a clue taped to the statue on the memorial that can be seen from the Abbey Road webcam. This clue (identifying itself as '3/3') read: 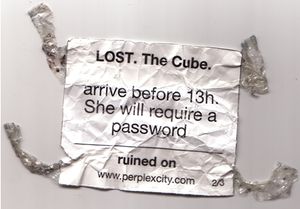 Shortly afterwards, Reason found another clue crumpled into a ball and placed on top of the wall opposite Abbey Road Studios. Given that it had tape attached to it we suspect it should have been affixed to something but had been removed. This clue (identifying itself as '2/3') read: 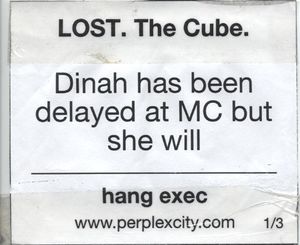 At this point, growfybruce recognised that the text at the bottom of the notes formed a crossword clue. BoBzOmBiE found the third clue ('1/3') attached to the wall behind the monument (as seen from the webcam).

This gives the full crossword clue as "hang exec ruined on stock market (8)". growfybruce pointed out that 'ruined' clues an anagram of 'hang exec' which is EXCHANGE - another word for 'stock market'.

At around 12:45 a woman sat down not too far from us with a stack of envelopes and spaceXplorer asked her if she was Dinah and gave her the password - and in exchange, Dinah gave each of us an envelope containing the Perplex City Postcard and a print-out of an email conversation (including an encrypted section).