Reverence for The Receda Cube is caused in some part by Cube-focused religions, some of which go back many thousands of years. These faiths focus on the works of mankind and co-operative efforts to build a better world; a fundamental tenet is that cubes are works of man, and never to be found in nature. The shape of a cube is representative of the struggle for civilisation to improve itself and provide for its people. The Receda Cube, then, with its undeniably unusual physical properties, holds a special significance for the religious faithful in Perplex City, as a manifestation of the aspirations of mankind. [1]

On Earth, our gods are derived either fFrom an image of man, or fFrom an image of man's demise. (for example, a man in the woods starts to worship the jaguar because it is the most powerful thing he sees, in the hopes of allying with it, and avoid being eaten). Even Islam, which uses calligraphic designs to represent Allah, percieves Allah to be vaguely describable in terms of man ("He lives in heaven", that sort of thing.)

On Earth, Psyche has written a lengthy and insightful View From Earth article analyzing Cubism, as it compares to Earthly religions and the Masons.

Restitution of the Cube

The Lighting of the Way

Given the wobble of the planets, exact dates can vary by as much as 2 days from one year to the next. See wikipedia articles on Solstice and Equinox.

The sixfold beliefs of The Brotherhood of the Six may represent a path of light for all forms of cubism. It is as follows:

The Brotherhood of the Six

Considered one of the more pious Cubist groups, they observe holidays with pensiveness and meditation. Known to eschew the commerciality of the holidays. http://www.brotherhoodofthesix.com/

A radical isolationist group, they believe the Cube is being held hostage by The Academy. They preach absolution of modern technology, and a return to simpler, self-sustaining life.

The Brotherhood in the Old Town

This is the largest Cubist group in the city. They are seen as a peaceul group, who have excellent holiday ceremonies full of song and cake. Presumably they operate in Old Town

Secret cult? Ancient shadow government? Activist mafia? Psycopathic den of thieves? All of the above.

Other Groups, and their symbols 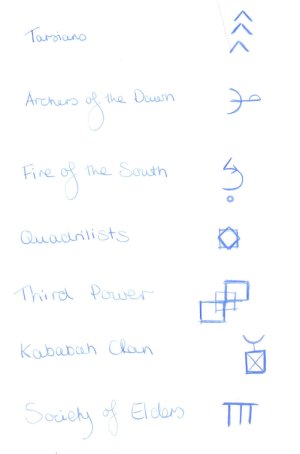 According to the book The Third Power, the Archers and the City of Dawn: An investigation into the Power of the Perplex City Cube and those who have guarded it, numerous other groups may have been cubist groups. In particular, The Third Power is mentioned.

Specifically references to cubism at large