After following The Receda Trail, PXC players realized that they must gather together to intercept a secret Third Power rendezvous. So on October 22, 30-40 people gathered in Clapham Common - from forum regulars to people whose interest had been roused by an ad in the Oct. 20 Metro:

A simple cipher reveals the message to be: 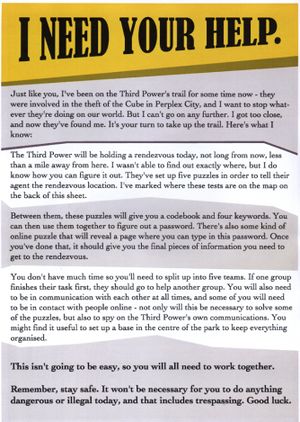 Armed with maps from our anonymous friend and organized by GuyP, players arrived in Clapham Common wearing the requisite purple.

After groups began to congregate, a motorbike dropped off a package containing folders with maps and instructions, and the basic treasure trail, with five tasks in five locations (plus one virtual).

So, the PXC players divided themselves into five groups, and commenced solving.

The reader should understand how crazy this all was! Every 5 minutes, new pages were cropping up all over! -Scott

Our trail of the day began at:

3p.html kept a running update of changes. Immediately, this was noted:

Which led us to look at this page:

This immediately made the astute think of other sites:

Carefully, it was noted the logical connection would be the song, mentioned in the "approach" interview.

Once again, wise hands referred to past trail efforts, and dialed up the somnatherapy line. The sculptor page had a series of numbers, which gave clues about what to dial in what order.

The 3p.html page was once again updated to say:

This led us to look here:

However, the song being played is The Moonlight Sonata

The long and very interesting path you are led on leads you here:

Carrying on from above we got:

Caps on the page give you bookitnow:

Upon reaching the small lake marked on the map, the group discovered three objects floating around in it. After much discussion and debating over how to retrieve them, including some poor souls almost willing to sacrifice their dryness for the cause, an individual pointed out handy strings which could be used to withdraw the objects from the water.

Inside were square pieces of paper each devided into a 3x3 grid. There were 18 pieces altogether, 2 identical sets of nine. These were all maps of a wide expanse of water with named islands and boats in certain squares. The boats all had directions underneath to denote the paths they travelled from island to island (e.g. N SE W E S) with the goal being to use this info to arrange the grid correctly and find out which island was visited by all boats (assuming that the boat continues in said direction until an island is reached before changing direction to the next one, etc without going off the side) This puzzle got very close to being solved in the time limit but unfortunately the final answer was not deduced in the given time. Looks like it would've been GREEN though. CORRECTION: Actual answer to solved puzzle was GAUGE island. 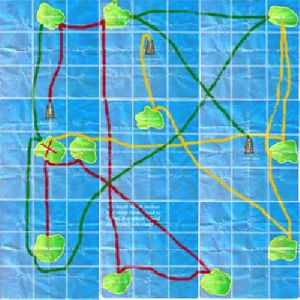 The team that headed out here was included brat-sampson, and Jeb, who was in contact with Jakeo by phone. Upon arriving at a patch of gravel, they discovered 3 aluminium suitcases, two of which were padlocked.

The first contained two jigsaw puzzles that appeared to have braille on it in the form of orange and purple fish. Referencing the braille page on wikipedia ([1]) The page as translated into a sequence of numbers:

The team on the ground solved this sequence to be:

377 was the combination to the padlocked suitcase.

This has maple brown and orange maple leaves which spell out MATCH 1 5 7 13 23. Match is presumed to be the keyword, the number sequence remains a mystery.

Comedy Moment While on the phone with Jakeo describing the puzzle Jeb says 'Oh, okay. We've just smashed open one of the suitcases and are working on the next puzzle'

There was a fifth group on the ground who went to the location marked on the map by 'Boxes of Delight' but came past the 'Buried Secrets' group saying that they couldn't find anything (hence the confusion online as to where the sudokus came from - they were not in a 'Buried Secrets' briefcase). Fortunately a member of the group went and found sudokus in plastic cases attached to the trees. One box was ringed in red on each puzzle, and there were musical notes on the back of each. It was theorised that putting each puzzle in order of the length of the note on the back would have lead to a 33 digit number that could be used to find the keyword, but there was not enough time to solve all of them and the puzzle remains unsolved.

The handouts specified a telephone number, which instructed people to go to:

The radio play team had to ring in the radio show, take pictures of themselves doing specific things:

Then send them to the 'online team', who put them up for us to see as a link off the radiofeed. When they'd done them all it gave us the codeword ether which then let us get through the authenticate page.

The goal, at length, was to get 4 keywords, which was then fed to a codebook, and placed in a webpage:

However as the last minutes ticked down, we only needed one keyword. The security protocols had changed.

This led us (them, really) on a wild and crazy run around london!!

What took place then was a string of wild chases, running through the streets of London!! To cut through the enthusiasm a bit, when Chippy finally reached the end of the run, the 3p.html page was reporting all sorts of cataclysm!

Or did they have us in a large complex snare all along?

We'll let Brat-sampson fill in what happened next: 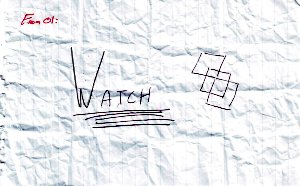 The note dropped by O8, which reads "From O1: Watch"

At that moment, the 3p.html page was updated to link to:

It suddenly became apparent: The unidentified person beckoning us to help them was in fact an operative with The Third Power. The whole trail had been a lengthy drawn out procecss to see how tenacious we really were.

All was not lost. a discussion between 08 and 01 was observed, and linked to here:

In 48 hours, the trail picked up here; See: 3PGroupwareManager