From Perplex City Wiki
(Redirected from The City)
Jump to: navigation, search

Perplex City is a sovereign city state. The city has a strong tradition of placing importance on intellect and intelligence over physical strength; Perplexians are thrilled to play games and puzzles of all sorts, and their culture and lifestyle reflects this. Perplex City's exact location is unknown, but it is In This Universe. After a Great War in the 18th Century, All of the City's neighbors were obliterated. Perplex City has remained the only location of great interest on the continent to this day.

Especially unusual about Perplex City is its entirely unique calendar, which is important to establish. The year 1737 AD is marked being the start of a new calendar for Perplexian Society. The year 1736 AD is marked as year 0 BC. Everything after that time is referred to as AC, and everything before is referred to as BC. It is unclear exactly what the "C" stands for, but it is believed to have to do with The War. Some have pointed out: in 1737 there was indeed a syzygy, wherein Mercury crossed Venus' path, as observed by John Bevis. It is the only such event in recorded history. 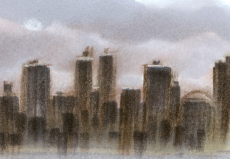 According to popular speculation, nomadic groups first settled in the Mazy River area in 1763BC (3500BC). Some contend the first settlers arrived in the catbite area as much as 1,000 years earlier. Nevertheless, the earliest settlers called the area "Pur Leks", because of the rich silver in the area ("Lek" being the ancient word for silver). In the coming centuries, The Pur Leks area become one of the most advanced and rapidly emerging societies in the region. It was at this time large structures were built, including the Hausam Theatre. An early ruling council took shape, made up of the wealthiest 5% of society, and took control of about a 500 square mile area around the evolving city. Trade routes were established, and such great authors as Datura and Lemnal began to come forth.

From 2000BC to 1250BC, we see slow but steady progress in the city's development. Agriculture becomes increasingly efficient, literacy and numeracy become widespread across the city, as does increasingly skilful craftsmanship. The city spreads north of the river for the first time, linking up with two or three small settlements that seem already to have existed. The cultural flowering of this period is well-known, with excellent examples of literature, sculpture, paintings, pottery and leatherwork all having been discovered.

The next millennium and a half are marked by steady increases in political, social, and economic advancement, leading into the modern age. The last several centuries before the modern era were marked by great conflict, though little is known about the nature of these conflicts. Some of these conflicts were still being dealt with into the modern age. But progress in varying forms continued apace, with such important discoveries as The Receda Cube in 1744 (7 AC) 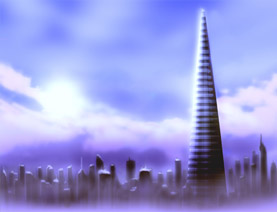 The City is made up several areas. While the full scope of the organization of the city is a bit unclear as yet, several significant areas are known:

Also within the city are numerous Parks and outdoor gathering places. Among them are:

Other areas around the city include:

Suburbs and rural districts of the city:

Education is extremely important to citizens of Perplex City. There are many fine institutions of higher learning where a person can go to broaden their minds. Perhaps the three best known are Marmalejo College, Perplex City University, and Perplex City Academy.

The importance of mental abilities in Perplex City society should be emphasized, here. Intelligence is, in the Perplexian eye, much more important than brute strength. This sentiment cuts to the heart of society, which offers up ad campaigns like PCBC's "Our pensions are so smart, they look after themselves." Even social gathering places involve some sort of mental challenge, such as a "Puzzle Bar".

The average person will attend a given number of years in primary and secondary school (Elementary through High School), then go on to attend one of the higher learning centers, such as Marmalejo College. The intrepid student will then go on to attend Perplex City Academy. However, at the student's discretion, they may choose to go on and take a Games Year with the Academy and Perplex City Academy Games, where they act as a puzzle setter. Games years are not required, though studies have shown individuals who go that extra distance do better in the workplace.

As a sidenote: the compelling nature of society to be mentally driven has forged an underground culture of mental stimulants. Some of which are legal, such as Ceretin, produced by Cognivia. Others are much more illicit. However, most stimulants and enhancers are frowned on in society.

Perplex City is governed by an elected Council of nine members, one of which is elected City Council Leader, who holds strong executive sway but appears by all accounts to cast exactly the same weight of vote as any other member of the council. In political votes and issues before the council, the council leader shall cast the deciding vote. All council members are elected by popular vote. Voter criteria are unknown, but believed to be open to most of the general public of adults.

The current City Council blossomed from a much earlier, older concept, which was made up of only the wealthiest 5% of the city's population.

Perplex City is 120 miles about its perimeter. While the internal area remains somewhat unclear, it can estimated as (120/4)^2, or about 900 square miles. The maximum possible area (assuming the city's perimeter is a perfect circle -- which is rather unlikely) is ((120/pi)/2)^2*pi, or about 1146 square miles. Compare this to London at 609 square miles, New York City at 309 square miles, or Los Angeles at 755 square miles.

Perplex City sits on the edge of the ocean, at the mouth of the Mazy River. Early settlers first moved into the area to the south of the river; Development has been slowly causing urban sprawl to creep ever northward. On a grand scale, the city is crawling north as older areas are abandoned, to be discovered centuries later in archaeological digs. (See Catbite and Newguard Ruins)

Perplex City is flanked by the ocean to the East, the Catbite Gorge to the South, and the Northside Nature Preserve. The Tanraga Mountains are off to the North-Northwest

The City seems to be mostly even and level; no significant hills or valleys exist inside the City, though terrain outside the city is another matter entirely.

The sea floor contains an elaborate network of faults, but it is rare for earthquake activity to register more than 180 Brigham-Horne units. 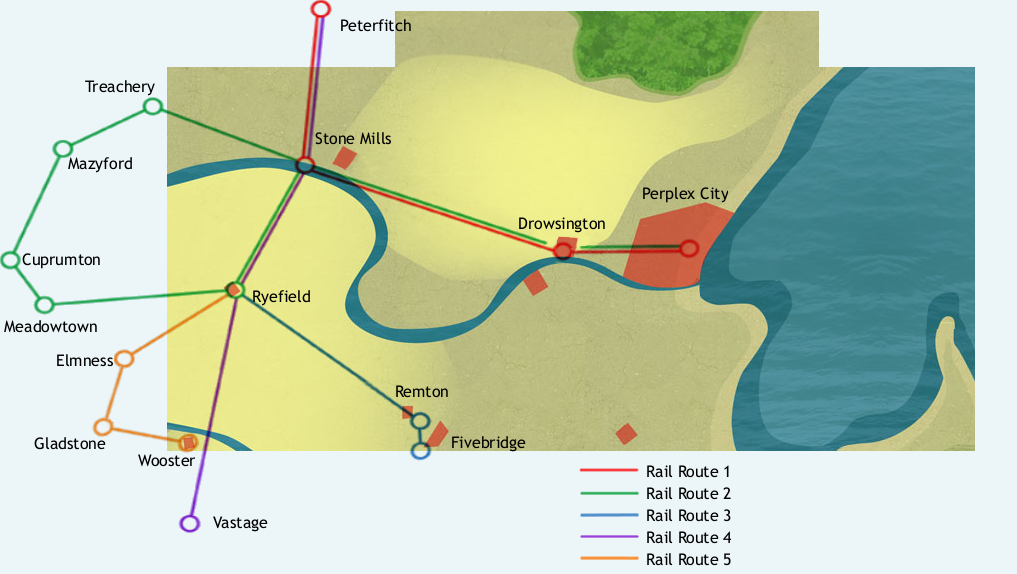 Above is a generalized map of the region around the City. Perplex City itself is situated at the mouth of the Mazy River. Immediately west is the sleepy village of Drowsington. It is a bit unclear, but the forest to the North may be Rudon Forest, or Sleed Forest. Just visible is the Black Fork River, to the south. Overlaying the terrain is a map of the Perplex City Rail System. Stone Mills rail node is skewed due to a general error on one or the other map, but is suffieciently close enough.

See also the Maps article has a number of maps collected of the city.

Perplex City bears a prosperous and stable modern market economy with its own currency, the Leck. The Leck is based on the value of silver, due to early silver mines along the Mazy River which essentially funded the blossoming city.

Publicly traded companies operate within the Perplex City Exchange (PCX), a healthy market moderator. The largest Banking Organization in the City is PCBC. Other financial organizations operate on a much smaller debit/credit based system, such as Comprendo.

The City prides itself on being entirely self sufficient, containing farms and food producers enough to feed the entire population of the city. It is reasonable to assume, then, a significant portion of the land surrounding the city is used for agricultural purposes. 2005 is the first year in the modern age the City is considering bringing in outside food sources, due to crop damage done by flooding link. The Perplex City Farm and Agricultural Consortium publicly represents the interests of farmers throughout the region.

Given the size and colourful history of the city, there exists a substantive tourism trade. While it does not account for a massive part of the gross annual product, tourism is a booming industry. Indeed, entertainment as a whole accounts for an almost immeasurable amount of the city's income. Financially speaking, historical societies, as well as less organized farm and art markets, do very well on their bottom line each year. This is because the city has such a rich history, and Perplexians are fascinated by the mysteries of the world around them. Quite simply, anyone is willing to pay to see something interesting from the city's past. (Though, not too far back; The War is a subject of great taboo.)

Hm, actually, while this paragraph amuses me some, it really should be updated to reflect a more accurate truth: The Tourist Guide was published fFor our amusement on Earth. Perplexians simply don't know what to do with visitors, so they made something nice to give us. Tourism implies tourists, and tourists implies people fFrom anywhere else in the world, which as we know doesnt exist. Scott 01:37, 21 March 2006 (EST)

The Perplexians are noted for a great interest in puzzles. This interest sinks deep into the culture, bordering on utter fascination. Even the most casual of activities may involve some sort of game or puzzle. The most highly watched and anticipated of public sporting events involves mental tests of prowess and ability. The Perplex City Academy Games (PCAG) are the perhaps the best known of these.

Perplexians have a fascination with Earth culture as well, which is at once foreign, and yet quite familiar. Several stores sell "genuine" Earth replicas of popular objects; especially those not found in Perplex City at all, such as paper books.

Music plays a large part in society. Tastes seem to range from Classical to Pop. Like on Earth, Perplexians are prone to being fascinated with popular culture. Musicians seem to be especially susceptible to this fascination.

Roads extend all throughout the city, though they are all pedestrian based. Dalia Way was the first street to become used entirely by pedestrians, starting in 1976 (239 AC). Presently, all private transportation is strictly prohibited inside the city limits. An extensive mass transit system including subways, trams, and driverless cars makes this possible, and naturally leads to a cleaner ecology.

A healthy, well used, well maintained Subway System flows throughout the city, having 29 Central Stations. A Light Rail System is in use, Perplex City Rail, which connects to the subway at certain points. Also, running on the Mazy River is the Perplex City Riverboat Service, which also connects to the Subway and light rail systems at certain points.

There appears to be no significant air travel available. Perplexians are somewhat intrigued by Earth's use of airplanes, which is a foreign concept. 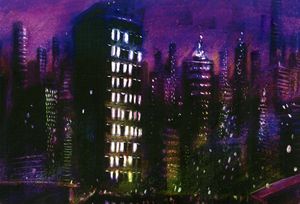 Many interesting features can be seen throughout the city. The tallest building in Perplex City is the Ascendancy Point, which stands a mighty 1,300 meters tall. The Mobius Strip is a sea-born platform of commercial, retail, and light residential areas (built in the shape of a mobius strip, vaguely).

The city boasts an extensive Subway System (see transportation, above).

True to Perplexian form, it is not uncommon for structures to have a puzzle built into their construction. For example, The Buttered Bridge's support walls were designed to contain pictograms, which unfold into a puzzle of their own.

Below the City -- below even the subway system -- there exists a set of catacombs, which were originally constructed as silver mines in the early days of The City. The ceilings are covered in unusual mosaics with ancient obscure puzzles. Their original intent is somewhat unknown. (Violet Kiteway discusses the catacombs here: link.